How COVID-19 can damage the brain

How COVID-19 can damage the brain

Some people who become ill with the coronavirus develop neurological symptoms. Scientists are struggling to understand why. 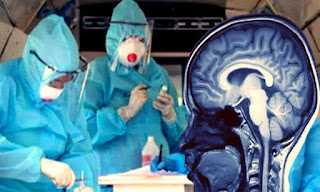 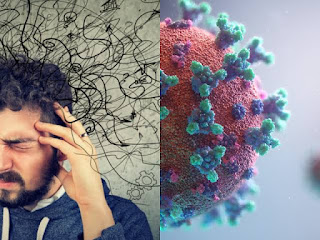 The woman had seen lions and monkeys in her house. She was becoming disoriented and aggressive towards others, and was convinced that her husband was an impostor. She was in her mid-50s — decades older than the age at which psychosis typically develops — and had no psychiatric history. What she did have, however, was COVID-19. Hers was one of the first known cases of someone developing psychosis after contracting the disease

In the early months of the COVID-19 pandemic, doctors struggled to keep patients breathing, and focused mainly on treating damage to the lungs and circulatory system. But even then, evidence for neurological effects was accumulating. Some people hospitalized with COVID-19 were experiencing delirium: they were confused, disorientated and agitated. In April, a group in Japan published the first report of someone with COVID-19 who had swelling and inflammation in brain tissues. Another report described a patient with deterioration of myelin, a fatty coating that protects neurons and is irreversibly damaged in neurodegenerative diseases such as multiple sclerosis.

“The neurological symptoms are only becoming more and more scary,” says Alysson Muotri, a neuroscientist at the University of California, San Diego, in La Jolla.

The list now includes stroke, brain haemorrhage and memory loss. It is not unheard of for serious diseases to cause such effects, but the scale of the COVID-19 pandemic means that thousands or even tens of thousands of people could already have these symptoms, and some might be facing lifelong problems as a result.

Yet researchers are struggling to answer key questions — including basic ones, such as how many people have these conditions, and who is at risk. Most importantly, they want to know why these particular symptoms are showing up.

Although viruses can invade and infect the brain, it is not clear whether SARS-CoV-2 does so to a significant extent. The neurological symptoms might instead be a result of overstimulation of the immune system. It is crucial to find out, because these two scenarios require entirely different treatments. “That’s why the disease mechanisms are so important,” says Benedict Michael, a neurologist at the University of Liverpool, UK.

As the pandemic ramped up, Michael and his colleagues were among many scientists who began compiling case reports of neurological complications linked to COVID-19.

In a June paper5, he and his team analysed clinical details for 125 people in the United Kingdom with COVID-19 who had neurological or psychiatric effects. Of these, 62% had experienced damage to the brain’s blood supply, such as strokes and haemorrhages, and 31% had altered mental states, such as confusion or prolonged unconsciousness — sometimes accompanied by encephalitis, the swelling of brain tissue. Ten people who had altered mental states developed psychosis

Not all people with neurological symptoms have been seriously ill in intensive-care units, either. “We’ve seen this group of younger people without conventional risk factors who are having strokes, and patients having acute changes in mental status that are not otherwise explained,” says Michael.

A similar study1 published in July compiled detailed case reports of 43 people with neurological complications from COVID-19. Some patterns are becoming clear, says Michael Zandi, a neurologist at University College London and a lead author on the study. The most common neurological effects are stroke and encephalitis. The latter can escalate to a severe form called acute disseminated encephalomyelitis, in which both the brain and spinal cord become inflamed and neurons lose their myelin coatings — leading to symptoms resembling those of multiple sclerosis. Some of the worst-affected patients had only mild respiratory symptoms. “This was the brain being hit as their main disease,” says Zandi.

Less common complications include peripheral nerve damage, typical of Guillain–Barré syndrome, and what Zandi calls “a hodgepodge of things”, such as anxiety and post-traumatic stress disorder. Similar symptoms have been seen in outbreaks of severe acute respiratory syndrome (SARS) and Middle East respiratory syndrome (MERS), also caused by coronaviruses. But fewer people were infected in those outbreaks, so less data are available.

But a major problem in quantifying cases is that clinical studies have typically focused on people with COVID-19 who were hospitalized, often those who required intensive care. The prevalence of neurological symptoms in this group could be “more than 50%”, says neurobiologist Fernanda De Felice at the Federal University of Rio de Janeiro in Brazil. But there is much less information about those who had mild illness or no respiratory symptoms.

That scarcity of data means it is difficult to work out why some people have neurological symptoms and others do not. It is also unclear whether the effects will linger: COVID-19 can have other health impacts that last for months, and different coronaviruses have left some people with symptoms for years

The most pressing question for many neuroscientists, however, is why the brain is affected at all. Although the pattern of disorders is fairly consistent, the underlying mechanisms are not yet clear, says De Felice.

Finding an answer will help clinicians to choose the right treatments. “If this is direct viral infection of the central nervous system, these are the patients we should be targeting for remdesivir or another antiviral,” says Michael. “Whereas if the virus is not in the central nervous system, maybe the virus is clear of the body, then we need to treat with anti-inflammatory therapies.”

Getting it wrong would be harmful. “It’s pointless giving the antivirals to someone if the virus is gone, and it’s risky giving anti-inflammatories to someone who’s got a virus in their brain,” says Michael.

There is clear evidence that SARS-CoV-2 can infect neurons. Muotri’s team specializes in building ‘organoids’ — miniaturized clumps of brain tissue, made by coaxing human pluripotent stem cells to differentiate into neurons.

In a May preprint, the team showed that SARS-CoV-2 could infect neurons in these organoids, killing some and reducing the formation of synapses between them. Work by immunologist Akiko Iwasaki and her colleagues at Yale University School of Medicine in New Haven, Connecticut, seems to confirm this using human organoids, mouse brains and some post-mortem examinations, according to a preprint published on 8 September. But questions remain over how the virus might reach people’s brains.

Because loss of smell is a common symptom, neurologists wondered whether the olfactory nerve might provide a route of entry. “Everyone was concerned that this was a possibility,” says Michael. But the evidence points against it.

A team led by Mary Fowkes, a pathologist at the Icahn School of Medicine at Mount Sinai in New York City, posted a preprint in late May describing post mortems in 67 people who had died of COVID-19. “We have seen the virus in the brain itself,” says Fowkes: electron microscopes revealed its presence. But virus levels were low and were not consistently detectable. Furthermore, if the virus was invading through the olfactory nerve, the associated brain region should be the first to be affected. “We’re simply not seeing the virus involved in the olfactory bulb,” says Fowkes. Rather, she says, infections in the brain are small and tend to cluster around blood vessels.

Michael agrees that the virus is hard to find in the brain, compared with other organs. Tests using the polymerase chain reaction (PCR) often do not detect it there, despite their high sensitivity, and several studies have failed to find any virus particles in the cerebrospinal fluid that surrounds the brain and spinal cord. One reason might be that the ACE2 receptor, a protein on human cells that the virus uses to gain entry, is not expressed much in brain cells.

“It seems to be incredibly rare that you get viral central nervous system infection,” Michael says. That means many of the problems clinicians are seeing are probably a result of the body’s immune system fighting the virus.

Still, this might not be true in all cases, which means that researchers will need to identify biomarkers that can reliably distinguish between a viral brain infection and immune activity. That, for now, means more clinical research, post mortems and physiological studies.

De Felice says that she and her colleagues are planning to follow patients who have recovered after intensive care, and create a biobank of samples including cerebrospinal fluid. Zandi says that similar studies are beginning at University College London. Researchers will no doubt be sorting through such samples for years. Although the questions they’re addressing have come up during nearly every disease outbreak, COVID-19 presents new challenges and opportunities, says Michael. “What we haven’t had since 1918 is a pandemic on this scale.”

at September 28, 2020
Email ThisBlogThis!Share to TwitterShare to FacebookShare to Pinterest