(American English) or anaesthetic (British English; see spelling differences) is a drug used to induce anesthesia - in other words, to result in a temporary loss of sensation or awareness. They may be divided into two broad classes: general anesthetics, which cause a reversible loss of consciousness, and local anesthetics, which cause a reversible loss of sensation for a limited region of the body without necessarily affecting consciousness. 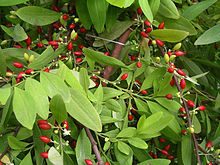 A wide variety of drugs are used in modern anesthetic practice. Many are rarely used outside anesthesiology, but others are used commonly in various fields of healthcare. Combinations of anesthetics are sometimes used for their synergistic and additive therapeutic effects. Adverse effects, however, may also be increased. Anesthetics are distinct from analgesics, which block only sensation of painful stimuli.


Local anesthetic agents prevent transmission of nerve impulses without causing unconsciousness. They act by reversibly binding to fast sodium channels from within nerve fibers, thereby preventing sodium from entering the fibres, stabilising the cell membrane and preventing action potential propagation. Each of the local anesthetics have the suffix "-caine" in their names.
Local anesthetics can be either ester- or amide-based. Ester local anesthetics (such as procaine, amethocaine, cocaine, benzocaine, tetracaine) are generally unstable in solution and fast-acting, are rapidly metabolised by cholinesterases in the blood plasma and liver, and more commonly induce allergic reactions. Amide local anesthetics (such lidocaine, prilocaine, bupivicaine, levobupivacaine, ropivacaine, mepivacaine, dibucaine and etidocaine) are generally heat-stable, with a long shelf life (around two years). Amides have a slower onset and longer half-life than ester anesthetics, and are usually racemic mixtures, with the exception of levobupivacaine (which is S(-) -bupivacaine) and ropivacaine (S(-)-ropivacaine). Amides are generally used within regional and epidural or spinal techniques, due to their longer duration of action, which provides adequate analgesia for surgery, labor, and symptomatic relief.
Only preservative-free local anesthetic agents may be injected intrathecally.
Pethidine also has local anesthetic properties, in addition to its opioid effects.

Volatile agents are specially formulated organic liquids that evaporate readily into vapors, and are given by inhalation for induction or maintenance of general anesthesia. Nitrous oxide and xenon are gases at room temperature rather than liquids, so they are not considered volatile agents. The ideal anesthetic vapor or gas should be non-flammable, non-explosive, and lipid-soluble. It should possess low blood gas solubility, have no end-organ (heart, liver, kidney) toxicity or side-effects, should not be metabolized, and should not be an irritant to the respiratory pathways of the patient.
No anaesthetic agent currently in use meets all these requirements, nor can any anaesthetic agent be considered safe. There are inherent risks and drug interactions that are specific to each and every patient.] The agents in widespread current use are isoflurane, desflurane, sevoflurane, and nitrous oxide. Nitrous oxide is a common adjuvant gas, making it one of the most long-lived drugs still in current use. Because of its low potency, it cannot produce anesthesia on its own but is frequently combined with other agents. Halothane, an agent introduced in the 1950s, has been almost completely replaced in modern anesthesia practice by newer agents because of its shortcomings.] Partly because of its side effects, enflurane never gained widespread popularity.
In theory, any inhaled anesthetic agent can be used for induction of general anesthesia. However, most of the halogenated anesthetics are irritating to the airway, perhaps leading to coughing, laryngospasm and overall difficult inductions. For this reason, the most frequently used agent for inhalational induction is sevoflurane. All of the volatile agents can be used alone or in combination with other medications to maintain anesthesia (nitrous oxide is not potent enough to be used as a sole agent).
Volatile agents are frequently compared in terms of potency, which is inversely proportional to the minimum alveolar concentration. Potency is directly related to lipid solubility. This is known as the Meyer-Overton hypothesis. However, certain pharmacokinetic properties of volatile agents have become another point of comparison. Most important of those properties is known as the blood/gas partition coefficient. This concept refers to the relative solubility of a given agent in blood. Those agents with a lower blood solubility (i.e., a lower blood–gas partition coefficient; e.g., desflurane) give the anesthesia provider greater rapidity in titrating the depth of anesthesia, and permit a more rapid emergence from the anesthetic state upon discontinuing their administration. In fact, newer volatile agents (e.g., sevoflurane, desflurane) have been popular not due to their potency (minimum alveolar concentration), but due to their versatility for a faster emergence from anesthesia, thanks to their lower blood–gas partition coefficient.

Edit
While there are many drugs that can be used intravenously to produce anesthesia or sedation, the most common are:
The two barbiturates mentioned above, thiopental and methohexital, are ultra-short-acting, and are used to induce and maintain anesthesia. However, though they produce unconsciousness, they provide no analgesia (pain relief) and must be used with other agents. Benzodiazepines can be used for sedation before or after surgery and can be used to induce and maintain general anesthesia. When benzodiazepines are used to induce general anesthesia, midazolam is preferred. Benzodiazepines are also used for sedation during procedures that do not require general anesthesia. Like barbiturates, benzodiazepines have no pain-relieving properties. Propofol is one of the most commonly used intravenous drugs employed to induce and maintain general anesthesia. It can also be used for sedation during procedures or in the ICU. Like the other agents mentioned above, it renders patients unconscious without producing pain relief. Because of its favorable physiological effects, "etomidate has been primarily used in sick patients". Ketamine is infrequently used in anesthesia because of the unpleasant experiences that sometimes occur on emergence from anesthesia, which include "vivid dreaming, extracorporeal experiences, and illusions."] However, like etomidate it is frequently used in emergency settings and with sick patients because it produces fewer adverse physiological effects. Unlike the intravenous anesthetic drugs previously mentioned, ketamine produces profound pain relief, even in doses lower than those that induce general anesthesia. Also unlike the other anesthetic agents in this section, patients who receive ketamine alone appear to be in a cataleptic state, unlike other states of anesthesia that resemble normal sleep. Ketamine-anesthetized patients have profound analgesia but keep their eyes open and maintain many reflexes.

Edit
Concerns have been raised as to the safety of general anesthetics, in particular ketamine and isoflurane in neonates and young children due to significant neurodegeneration. The risk of neurodegeneration is increased in combination of these agents with nitrous oxide and benzodiazepines such as midazolam. This has led to the FDA and other bodies to take steps to investigate these concerns. These concerns have arisen from animal studies involving rats and non-human primates. Research has found that anesthetics which enhance GABA or block NMDA can precipitate neuronal cell death in these animals. The developing central nervous system is most vulnerable to these potential neurotoxic effects during the last trimester of pregnancy and shortly after birth. Melatonin, a free oxygen radical scavenger and indirect antioxidant is known to reduce the toxicity of a range of drugs has been found in a rat study to reduce the neurotoxicity of anesthetic agents to the early developing brain. Recent research in animals has found that all sedatives and anesthetics cause extensive neurodegeneration in the developing brain. There is also some evidence in humans that surgery and exposure to anesthetics in the early developmental stages causes persisting learning deficits.

Muscle relaxants do not render patients unconscious or relieve pain. Instead, they are sometimes used after a patient is rendered unconscious (induction of anesthesia) to facilitate intubation or surgery by paralyzing skeletal muscle.

Another potentially disturbing complication where neuromuscular blockade is employed is 'anesthesia awareness'. In this situation, patients paralyzed may awaken during their anesthesia, due to an inappropriate decrease in the level of drugs providing sedation or pain relief. If this fact is missed by the anesthesia provider, the patient may be aware of their surroundings, but be incapable of moving or communicating that fact. Neurological monitors are increasingly available that may help decrease the incidence of awareness. Most of these monitors use proprietary algorithms monitoring brain activity via evoked potentials. Despite the widespread marketing of these devices many case reports exist in which awareness under anesthesia has occurred despite apparently adequate anesthesia as measured by the neurologic monitor
Intravenous reversal agents
Ed