This study aimed to evaluate the effects of propofol and dexmedetomidine over different timescales on the IVF outcomes for transvaginal oocyte retrieval (TVOR). Twenty-four rats included in the study were divided into two main groups and three subgroups were subjected to the ovulation induction process. Group 1 was administered propofol (100 mg/kg i.v.) and group 2 were administered dexmedetomidine (25 µg/kg i.p.) The oviduct collection procedure was completed within 15 min for subgroup Pro15min, Dex15min (n = 4), within 16 to 30 min for subgroup Pro30min, Dex30min (n = 4) and within 31 to 60 min for subgroup Pro60min, Dex60min (n = 4) after euthanasia. The total number of oocytes was counted. After in vitro fertilization, the number and quality of embryos were evaluated. The number of pups born were evaluated after embryo transfer. The embryo number, quality and pup count decreased as the administration time for propofol increased (p < 0.05). No statistically significant difference was found between the dexmedetomidine subgroups for embryo number, quality and pup count(p > 0.05). As the exposure time to propofol increased, the number and quality of embryos obtained, and the pup count, decreased. The use of dexmedetomidine had no negative impacts on the number of embryos, their quality or the number of pups.

In vitro fertilization (IVF) is currently the most widely used assisted reproductive technique worldwide. The IVF procedure technically includes ovarian stimulation and monitoring, oocyte collection with transvaginal follicle aspiration, fertilization in the laboratory and finally, transfer of embryos back to the uterus. Obtaining oocytes from ovarian follicles by ultrasound-guided needle aspiration from the vaginal wall requires anesthesia and/or analgesia, and this is defined as transvaginal oocyte retrieval (TVOR)1. Although TVOR is a relatively simple and minimally invasive procedure, the patient may experience anxiety and pain due to puncture of the vaginal skin mucosa and ovarian capsule with a needle. Various methods of anesthesia are used to manage the patients, such as general anesthesia, conscious sedation and regional anesthesia. There is no consensus on the type of anesthetic agent to use for TVOR.

Several studies have indicated that anesthetic drugs can enter the follicular fluids (FF)4. There is some concern about anesthetic drugs accumulating in FF and their negative impacts on fertilization rates and embryo development under general anesthesia.

Propofol is a rapidly acting anesthetic agent with short induction and recovery times5. The most commonly used anesthetic agent during TVOR is intravenous propofol, which is a safe drug for use in IVF.

However, some studies have revealed that propofol use is associated with reduced fertilization rates (FR) and inhibition of blastocyst development in single cell embryos7.

Dexmedetomidine is a centrally acting α-2 receptor agonist with sedative and analgesic properties without respiratory suppressing effects. However, dexmedetomidine use may be limited by the increased incidence of hypotension and bradycardia, and a limited ability to achieve deep sedation. There are not enough studies on the use of dexmedetomidine during the TVOR process.

This study aimed to evaluate the effect of these two anesthetic agents used in anesthesia for different durations on IVF results. 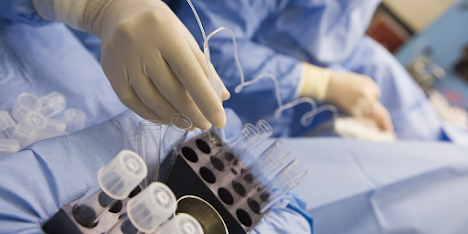 In our study, no statistically significant difference was found between the mean number of MII, MI, GV and total oocyte counts between the subgroups (P > 0.05) (Table 1).