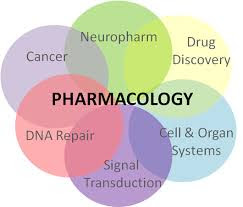 Pharmacology is the branch of biology concerned with the study of drug action, where a drug can be broadly defined as any man-made, natural, or endogenous (from within the body) molecule which exerts a biochemical or physiological effect on the cell, tissue, organ, or organism (sometimes the word pharmacon is used as a term to encompass these endogenous and exogenous bioactive species). More specifically, it is the study of the interactions that occur between a living organism and chemicals that affect normal or abnormal biochemical function. If substances have medicinal properties, they are considered pharmaceuticals. Pharmacology Constant tempertature bath for isolated organs Wellcome M0013241.jpg Diagrammatic representation of organ bath used for studying the effect of isolated tissues MeSH Unique ID D010600

Pharmacology is not synonymous with pharmacy and the two terms are frequently confused. Pharmacology, a biomedical science, deals with the research, discovery, and characterization of chemicals which show biological effects and the elucidation of cellular and organismal function in relation to these chemicals. In contrast, pharmacy, a health services profession, is concerned with application of the principles learned from pharmacology in its clinical settings; whether it be in a dispensing or clinical care role. In either field, the primary contrast between the two are their distinctions between direct-patient care, for pharmacy practice, and the science-oriented research field, driven by pharmacology.

The origins of clinical pharmacology date back to the Middle Ages in Avicenna's The Canon of Medicine, Peter of Spain's Commentary on Isaac, and John of St Amand's Commentary on the Antedotary of Nicholas. Clinical pharmacology owes much of its foundation to the work of William Withering. Pharmacology as a scientific discipline did not further advance until the mid-19th century amid the great biomedical resurgence of that period. Before the second half of the nineteenth century, the remarkable potency and specificity of the actions of drugs such as morphine, quinine and digitalis were explained vaguely and with reference to extraordinary chemical powers and affinities to certain organs or tissues. The first pharmacology department was set up by Rudolf Buchheim in 1847, in recognition of the need to understand how therapeutic drugs and poisons produced their effects. Early pharmacologists focused on natural substances, mainly plant extracts. Pharmacology developed in the 19th century as a biomedical science that applied the principles of scientific experimentation to therapeutic contexts. Today pharmacologists use genetics, molecular biology, biochemistry, and other advanced tools to transform information about molecular mechanisms and targets into therapies directed against disease, defects or pathogens, and create methods for preventative care, diagnostics, and ultimately personalized medicine. Divisions Edit The discipline of pharmacology can be divided into many sub disciplines each with a specific focus.

Pharmacogenomics is the application of genomic technologies to drug discovery and further characterization of older drugs. Pharmacoepidemiology Edit Pharmacoepidemiology is the study of the effects of drugs in large numbers of people. Safety pharmacology Edit Safety pharmacology specialises in detecting and investigating potential undesirable pharmacodynamic effects of new chemical entities (NCEs) on physiological functions in relation to exposure in the therapeutic range and above.

Toxicology is the study of the adverse effects, molecular targets, and characterization of drugs or any chemical substance in excess (including those beneficial in lower doses).

Theoretical pharmacology is a relatively new and rapidly expanding field of research activity in which many of the techniques of computational chemistry, in particular computational quantum chemistry and the method of molecular mechanics, are proving to be of great value. Theoretical pharmacologists aim at rationalizing the relation between the activity of a particular drug, as observed experimentally, and its structural features as derived from computer experiments. They aim to find structure—activity relations. Furthermore, on the basis of the structure of a given organic molecule, the theoretical pharmacologist aims at predicting the biological activity of new drugs that are of the same general type as existing drugs. More ambitiously, it aims to predict entirely new classes of drugs, tailor-made for specific purposes.

Posology is the study of how medicines are dosed. This depends upon various factors including age, climate, weight, sex, elimination rate of drug, genetic polymorphism and time of administration. It is derived from the Greek words πόσος posos meaning "how much?" and -λογία -logia "study of".

Environmental pharmacology is a new discipline. Focus is being given to understand gene–environment interaction, drug-environment interaction and toxin-environment interaction. There is a close collaboration between environmental science and medicine in addressing these issues, as healthcare itself can be a cause of environmental damage or remediation. Human health and ecology are intimately related. Demand for more pharmaceutical products may place the public at risk through the destruction of species. The entry of chemicals and drugs into the aquatic ecosystem is a more serious concern today. In addition, the production of some illegal drugs pollutes drinking water supply by releasing carcinogens. This field is intimately linked with Public Health fields.

Experimental pharmacology involves the study of pharmacology through bioassay, to test the efficacy and potency of a drug.

Dental pharmacology relates to the study of drugs commonly used in the treatment of dental disease.

The study of chemicals requires intimate knowledge of the biological system affected. With the knowledge of cell biology and biochemistry increasing, the field of pharmacology has also changed substantially. It has become possible, through molecular analysis of receptors, to design chemicals that act on specific cellular signaling or metabolic pathways by affecting sites directly on cell-surface receptors (which modulate and mediate cellular signaling pathways controlling cellular function). A chemical has, from the pharmacological point-of-view, various properties.

Pharmacokinetics describes the effect of the body on the chemical (e.g. half-life and volume of distribution), and pharmacodynamics describes the chemical's effect on the body (desired or toxic). When describing the pharmacokinetic properties of the chemical that is the active ingredient or active pharmaceutical ingredient (API), pharmacologists are often interested in L-ADME:
Liberation – How is the API disintegrated (for solid oral forms (breaking down into smaller particles)), dispersed, or dissolved from the medication?
Absorption – How is the API absorbed (through the skin, the intestine, the oral mucosa)?
Distribution – How does the API spread through the organism?
Metabolism – Is the API converted chemically inside the body, and into which substances. Are these active (as well)? Could they be toxic? Excretion – How is the API excreted (through the bile, urine, breath, skin)? Medication is said to have a narrow or wide therapeutic index or therapeutic window. This describes the ratio of desired effect to toxic effect. A compound with a narrow therapeutic index (close to one) exerts its desired effect at a dose close to its toxic dose. A compound with a wide therapeutic index (greater than five) exerts its desired effect at a dose substantially below its toxic dose. Those with a narrow margin are more difficult to dose and administer, and may require therapeutic drug monitoring (examples are warfarin, some antiepileptics, aminoglycoside antibiotics). Most anti-cancer drugs have a narrow therapeutic margin: toxic side-effects are almost always encountered at doses used to kill tumors.

Development of medication is a vital concern to medicine, but also has strong economical and political implications. To protect the consumer and prevent abuse, many governments regulate the manufacture, sale, and administration of medication. In the United States, the main body that regulates pharmaceuticals is the Food and Drug Administration and they enforce standards set by the United States Pharmacopoeia. In the European Union, the main body that regulates pharmaceuticals is the EMA and they enforce standards set by the European Pharmacopoeia. The metabolic stability and the reactivity of a library of candidate drug compounds have to be assessed for drug metabolism and toxicological studies. Many methods have been proposed for quantitative predictions in drug metabolism; one example of a recent computational method is SPORCalc. If the chemical structure of a medicinal compound is altered slightly, this could slightly or dramatically alter the medicinal properties of the compound depending on the level of alteration as it relates to the structural composition of the substrate or receptor site on which it exerts its medicinal effect, a concept referred to as the structural activity relationship (SAR). This means that when a useful activity has been identified, chemists will make many similar compounds called analogues, in an attempt to maximize the desired medicinal effect(s) of the compound. This development phase can take anywhere from a few years to a decade or more and is very expensive. These new analogues need to be developed. It needs to be determined how safe the medicine is for human consumption, its stability in the human body and the best form for delivery to the desired organ system, like tablet or aerosol. After extensive testing, which can take up to 6 years, the new medicine is ready for marketing and selling. As a result of the long time required to develop analogues and test a new medicine and the fact that of every 5000 potential new medicines typically only one will ever reach the open market, this is an expensive way of doing things, often costing over 1 billion dollars. To recoup this outlay pharmaceutical companies may do a number of things: Carefully research the demand for their potential new product before spending an outlay of company funds. Obtain a patent on the new medicine preventing other companies from producing that medicine for a certain allocation of time.

In the United States, the Food and Drug Administration (FDA) is responsible for creating guidelines for the approval and use of drugs. The FDA requires that all approved drugs fulfill two requirements: The drug must be found to be effective against the disease for which it is seeking approval (where 'effective' means only that the drug performed better than placebo or competitors in at least two trials). The drug must meet safety criteria by being subject to animal and controlled human testing. Gaining FDA approval usually takes several years. Testing done on animals must be extensive and must include several species to help in the evaluation of both the effectiveness and toxicity of the drug. The dosage of any drug approved for use is intended to fall within a range in which the drug produces a therapeutic effect or desired outcome. The safety and effectiveness of prescription drugs in the U.S. is regulated by the federal Prescription Drug Marketing Act of 1987. The Medicines and Healthcare products Regulatory Agency (MHRA) has a similar role in the UK.

Students of pharmacology are trained as biomedical scientists, studying the effects of drugs on living organisms. This can lead to new drug discoveries, as well as a better understanding of the way in which the human body works. Students of pharmacology must have detailed working knowledge of aspects in physiology, pathology and chemistry. During a typical degree they will cover areas such as (but not limited to) biochemistry, cell biology, basic physiology, genetics and the Central Dogma, medical microbiology, neuroscience, and depending on the department's interests, bio-organic chemistry, or chemical biology. Modern Pharmacology is highly interdisciplinary. Graduate programs accept students from most biological and chemical backgrounds. With the increasing drive towards biophysical and computational research to describe systems, pharmacologists may even consider themselves mainly physical scientists. In many instances, Analytical Chemistry is closely related to the studies and needs of pharmacological research. Therefore, many institutions will include pharmacology under a Chemistry or Biochemistry Department, especially if a separate Pharmacology Dept. does not exist. What makes an institutional department independent of another, or exist in the first place, is usually an artifact of historical times. Whereas a pharmacy student will eventually work in a pharmacy dispensing medications, a pharmacologist will typically work within a laboratory setting. Careers for a pharmacologist include academic positions (medical and non-medical), governmental positions, private industrial positions, science writing, scientific patents and law, consultation, biotech and pharmaceutical employment, the alcohol industry, food industry, forensics/law enforcement, public health, and environmental/ecological sciences.
Email ThisBlogThis!Share to TwitterShare to FacebookShare to Pinterest